The work of almost every generation of Serbian and Vojvodina artists in the ill-starred twentieth century emerged between wars.  Following fast on one another came: the Balkan Wars (1912-1913), the Great War (1914-1918), World War 2 (1941-1945), the civil war accompanying the fall of Yugoslavia (1991-1995), with the NATO bombing of the Federal Republic of Yugoslavia to round off the century.  Forever finding themselves between premonition, blood and hope, artists constantly endeavoured to give adequate expression to the feeling and spirit of the times, while achieving ontological authenticity and meaning.

Supported by the Vojvodina Secretariat for Culture and Information

There are three parts to Premonition, Blood, Hope.  The first consists of the Milan Konjović exhibition, At the Crossroads of Serbian art (1914-1993), which shows Konjović’s proposals for and influence on Serbian art of the time;  part two represents the Fatal nineties – Opposing Chaos, and part three: After 2000, Transition in Art – Art in Transition. 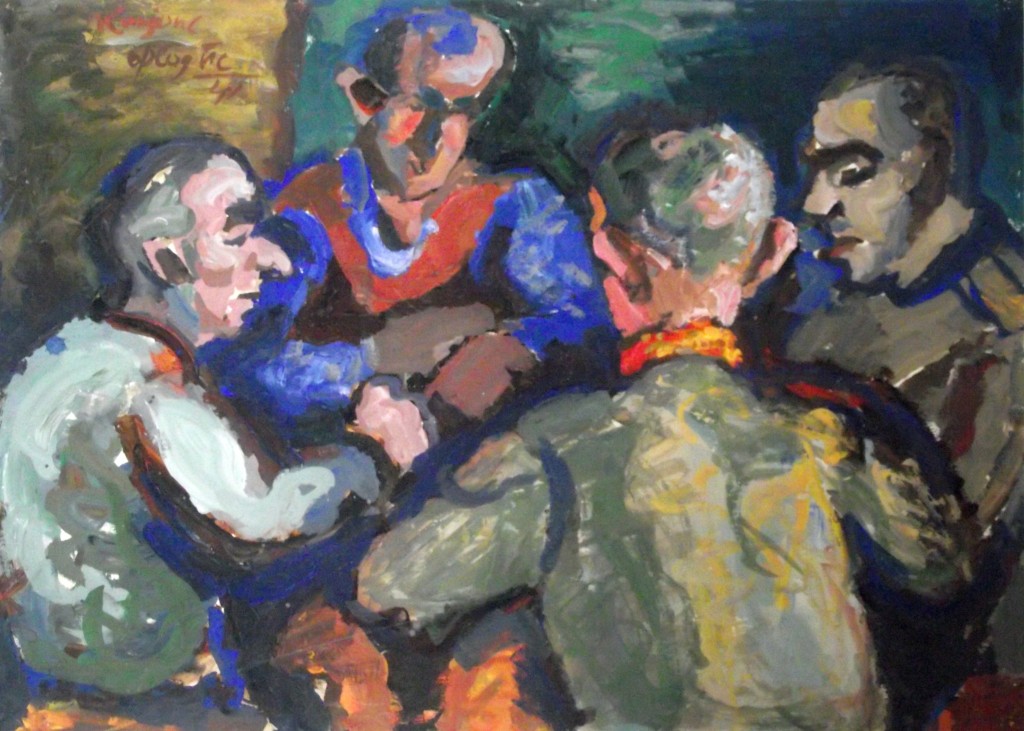 An illustration of historic and artistic developments from the outset of World War 1 to the collapse of Yugoslavia in the early 1990s, the particular focus here is on Milan Konjović (1898-1993) whose long life and opus over-shadowed almost all of the “foreshortened 20th century”.  His works covered key wartime events and his drawings from the Great War, in which he fought as a soldier on various fronts from Ukraine to northern Italy, have been preserved.  These are followed by pastels from the POW camp at Osnabrück, Oflag 5b, where he was imprisoned in 1941, and finally a testimony to the artist’s premonition of the civil war in Yugoslavia in the 1990s.

Konjović’s role in Serbian art is a major one since he was part of some of its most crucial and significant moments: in the post-cubist phase (1920-22); as a leading expressionist in the interwar period; as front runner in the fight against the ideology of socialist realism from the beginning of the 1950s to the early 1960s; as an exponent of early performance (1962), important in that it anticipated and initiated conceptual art in Serbia and Vojvodina, and finally as a participant in the postmodern Nova slika (New Image Painting) in the mid-1980s.

1. The Serbian Cubist Digression  In Serbian art history, Konjović is recognised as having produced the major works of cubism and post-cubism.  These represented the first decidedly and deliberately modernist paintings in Serbian art, important because of their radical contribution to stimulating modernist thinking among artists. In addition to Konjović, works by other important players  working in the same vein will be shown, such as Petar Dobrović, Sava Šumanović, Ivan Radović, and Arpad G. Balasz.

2. Expressionism – Pure Painting. The most important developments in Serbian painting between the two world wars – expressionism in colour and gesture, intimism, poetic and coloristic realism – are known in professional literature as the Circle of Pure Painting. Besides Konjović, among the other members were Bijelić, Dobrović, Šumanović, Job, Zora Petrović, Šerban who, wavering between avant-garde and tradition, arrived at authentic personal results that were close to the sensibilities of the world and times in which they lived and worked. This section of the exhibition presents the works of Zora Petrović, Petar Dobrović and Milenko Šerban.

3. Against Socialist Realism, Towards Abstraction. In post-war Yugoslavia, artists were obliged to adopt the concept of Socialist Realism, with the state trying to use art to prop up communist ideology and the regime. Konjović was a distinguished opponent of any such idea. Two exhibitions in spring of 1951, one by him the other by Lubarda, were a major contribution to vanquishing these policies. By the 1950s and early 1960s, several of Konjović’s paintings had begun to hint at abstraction, giving a major impetus to artistic freedom and the modernisation of Serbian art of the time. Other artists shown here are:  József  Ács, Boško and  Zoran Petrović, Ankica Oprešnik, Pál Petrik,  Milivoj Nikolajević  and others.

4. Only One Performance. In 1962, Milan Konjović gave a public performance of painting in Novi Sad, which all but coincided with similar performances by a few European painters such as Yves Klein and Georges Mathieu. It turned out to be the precursor of a powerful conceptual movement in Vojvodina, the seeds of which germinated in the late sixties and seventies. Along with photographs of the original performance, you will see works by conceptual artists from Vojvodina, members of the Bosch+Bosch group,  Bálint Szombathy, Slavko  Matković, Attila Csernik, Verbumprogram and others.

5. Art in the Eighties: Byzantine Quotations. By this time Konjović, himself in his eighties, was taking an active part in the art of the 1980s.  His plunge into expressionism and unexpected “quotations” from Byzantine iconography brought him closer to the contemporary artistic scene, not just as an anticipator but as a relevant participant in current happenings.  In addition to paintings from his “Byzantine Cycle”, we will be showing works by some of the most important representatives of the Vojvodina postmodern painters: László Kerekes, Milenko Prvački, Dobrivoje Rajić, Dušan Todorović, Branka Janković and Vera Zarić.

Art in the Nineties: Opposing Chaos – Reason and Sensitivity

Art in 1990s Yugoslavia took place against a backdrop of epochal crisis.  The dominant idea of those years was destruction, generated by the collapse of the former Yugoslav socialist federation, a catastrophic economic situation, world-record inflation, a stringent embargo and exclusion from the international community combined with the physical reality of wartime devastation.  Art in Vojvodina found a way to stand up to this state of affairs, fostering a spirit of multi-culturalism, flexible rationalism, harmony, constructiveness and building through ideas of geometry, minimalism and construction.  Artists demonstrated their wholehearted engagement in the form of street action, performances, large works executed “in situ” etc.  Throughout this time of “art in the nineties”, the guiding thought was Filberto Menna’s dictum that “art has the right to its own individuality – not to become dissociated but to offer its own example, to serve as model to other arts and practices”.  It resisted chaos, offering instead ideas of construction and order, harmony and rationalism.  Its chief figures are Zoran Pantelić, Rastislav Škulec, Dragan Rakić, Igor Antić, Zvonimir Santrač, Balint Szombathy, Andrej Tišma, Apsolutno and Mira Brtka.

The third part of the exhibition covers developments after 2000.  The leading figures here are the artists who, in the sublimation of an instant’s experience, summed up the twentieth century: intuiting the oncoming drama of war, being caught up in the atmosphere of a civil war (1991-1995), moving towards hope of better times only for a new premonition to overtake them, the brutal NATO bombing of 1999, followed by another period of hope after 2000.  This repetition of fate, naturally, is no fit state in which to initiate innovative change.  There is no prevailing approach, the abiding constant is a belief in ontological individuality and the value of art.  The subjects of art in Vojvodina are usually variations on the theme of social transition.  Simultaneously, as the global logic of the “iconosphere” predominated, pulsating with images of the most varied origin and intent, Serbian art was forced into transition from traditional to electronic media and electronic art.  The outstanding figures in art after 2000 are: Mira Brtka, Milan Blanuša, Goran Despotovski, Bosiljka Zirojević, Ljubomir Vučinić, Stevan Kojić, Nataša Teofilović, Jelena Bulajić, Andrea Ivanović, Korina Gubik, Andrea Palašti, MP_art, and Multiflex among others.